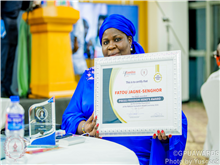 Currently working for Article19 as West Africa Director, she led campaign and advocacy initiatives for more than a decade to expose the appalling human rights situation of the Gambia before the African Commission on Human and Peoples Rights (ACHPR) and other international human rights bodies during the former regime.

Over the years, Fatou Jagne-Senghore co-authored reports, publications and contributed to setting up of programmes and initiatives to support persecuted journalists and human rights defenders in Tunisia before the Jasmine revolution and for the Gambia before the end of the repressive regime.  She has worked on policies, advising and providing technical support to governments and regulators on the implementation of legislative reforms to foster freedom of expression and access to information.

During the former regime, Fatou Jagne-Senghore provided both sanctuary and livelihood to Gambian journalists who fled to Senegal for exile. As champion of freedom of expression, she stood and fought for the media and freedom of express, and amplified the voice of journalists.

Fatou Jagne- Senghore received many distinctions and awards for her work for freedom of expression. These include the National Order of Merit by the President of France in April 2018 in recognition of her human rights’ work especially in the Gambia. In 2019, she was named in inaugural list of the100 Most Influential African Women by Advance Media