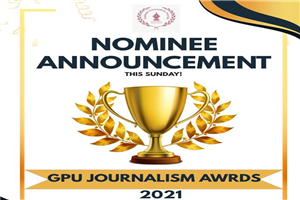 The Gambia Press Union National Journalism Awards Committee hereby announce the nominees for the 2021 Excellence in Journalism Awards. A total of 125 entries have been received this year, of which 108 were submitted via the award committee’s website whilst 17 were received by email.

35 journalists have been shortlisted for awards under the 15 contested categories up for grabs, with female applicants constituting 16 percent of the nominees whilst their male counterparts represent 84 percent. Three award categories namely: TV Platform of the Year, Commercial Radio Station of the Year, and Community Radio Station of the Year will be decided by public vote.  Journalist of the Year, on the other hand, will be selected by the judges from amongst the works submitted. No entry was submitted for the Photojournalist category.

Meanwhile, the Gambia Press Union will provide two nominees (individuals and/or institutions) under the special awards category in recognition of their contribution(s) towards press freedom in the country.  Also, as part of this year’s awards ceremony, the judges under the chairmanship of veteran journalist Esau Williams will provide a report on the state of journalism in the Gambia based on the works submitted by journalists from across the different media.