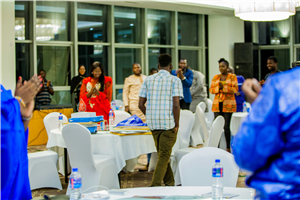 Economist Faults Army’s Commercial Agric Project, says it will Endanger Democracy by Kebba Ansu Manneh, Published on The Chronicle on 22 May 2019.

This is a well written newspaper story focused on a particular issue. i.e. the army’s intention to engage in agriculture and from the perspective of a single source, i.e. an economist. However, the reporter did well to obtain one external source (GCCI) to enhance the balance.

The reporter could have indeed sought many more sources to further improve the presentation, originality and angling of the story.

Kombo South: From Fighting to Save Environment to Fighting For Survival by Mustapha K. Darboe. Published on Kerr Fatou on 2nd August 2019.

This story is found to be a well written piece with a good story telling format.

The approach and angle of the story is great, and the information provided is strong with the required arguments, counter arguments and a broad perspective given of the impact of mining in the different mining sites in the country. Experts and relevant stakeholders were all featured.

This is a newspaper report about the Faraba incident one year later. It is an investigative report on the state of affairs after the conclusion of the Faraba Commission in terms of the implementation of the recommendations and life after the incident. The reporter did well to bring out the real issues as well as the mood of the people. By going to the community, the story captured the feelings and scenery of the life of a community ravaged by a painful encounter never experienced by them. The angling, presentation, originality and public benefit of the story are not only appropriate, but they indeed take the reader right into the hearts and minds of the victims as to create such level of empathy that they deserve. It is a excellent story about a community.

This is a newspaper report about the ICC Prosecutor Fatou Bensouda who was a state counsel under Jammeh at a time when severe right violations happened including right to fair trial. The story is well written with a huge news value given the issues and the person involved within the current transitional justice program. The angling, presentation, originality and public benefit are appropriate. There is huge effort and initiative by the reporter to tediously research and obtain relevant information.

Listen to the story HERE.

This entry has all the elements that is required for a radio production.  Different stakeholders were interviewed to throw light on the issue, from testimonies of family members who lost their loved ones to health officials and ordinary citizens. However, the use of language by the producer in her presentation, coupled with some limitations in pronunciation is the only weak areas of the radio piece presented.  It will be good that she works on language, does more reading and practice to improve her diction for good radio programming.

A BIG Chunk of Gambia’s 2020 budget goes to debt repayment Experts believe this is not encouraging Economic growth by Muhammed S. Bah. Published in FOROYAA on 27th December 2019.

The writing style and pattern is similar to the other 2 runners up however the clarity and simplicity of the written piece which makes it easy for one to read and understand the economic concepts gave it a slight edge.

Overall, ten submissions were entered for this category. All of the entries were beautifully written with a futuristic character, but no investigation done. For example, most of the stories wrote about an interesting topic and presented it in feature form but the information contained therein are obtain from open sources or some random interviews. This is not considered to be investigative reporting.

The winning entry has both feature and investigative characteristics and found to be worthy of an award. The angling is very accurate and thoughtful. The story is also newsworthy considering significant public funds have been ‘inappropriately’ spent without due diligence.

It gave lots of direct quotations and provides many useful documentary evidences. The grammar and style of presentation is good and clear. The story is investigative, very original in context and scope. It is considered to be of great public benefit. Taxpayers money to the tune of billion Dalasis spent with ‘inappropriately’ This story delves into state misuse of public funds and potentials for corruption.

The Rise, Fall and Rise Again of Cricket in The Gambia by Omar Jarju published in The Chronicle on April 1. 2019.

The story has a good angle and is newsworthy. The focus on the different stages of the development of cricket gives the story additional weight. The story is accuracy and factual with multiple interviews and quotation from sources. Well-presented and researched. The story is original, well researched with multiple quotations and interviews. The story takes account of the stand of cricket sports in The Gambia and gauged opinions of the people on it. The story has significant benefit for the populace particularly cricket fans.

This is an Interesting story on health decentralization matters and what other major hospitals face, especially in a key area in CRR and also catering to the URR. The story is factual, and research was made to get accurate information from authorities involved. Well-articulated, Grammar was decent, and style of reporting was relatable. Story in local and original; not reacting to an event but picking up a hospital that needs public attention about its affairs. The story provided a balanced perspective of the Bansang hospital which will allow viewers to see the challenges, benefits and understand the process of its operations.

Repatriated Yet Not Reintegrated written by Alagie Manneh, published in The Standard on Dec. 31 2019.

The story is newsworthy: It highlights the challenges faced by returnees who go pass the age of 35 and where they can benefit from reintegration programs. The story sought adequate sources for the article. Therefore, much accuracy was sought. The grammar is decent, the style of writing was not too professional in some instances, perhaps writer wanted to add humor. Presentation was too long. The story is a good attempt to stay original, looking into reintegration gaps and desperation and causes of irregular migration. The story is relevant in allowing the public to see the challenges and yet existing desperation and societal burden young people face with very limited support. The government and stakeholders can see from a story like this the needs for more efforts towards existing gaps in tackling irregular migration.

This category saw two story disqualifications: both stories were found to be in breach of submission rules. One was rejected because it was considered to be a product of a foreign media outlet and the other was published on a platform outside The Gambia.

This is a very well written newspaper story. It has all the hallmarks of a solid work of journalism. It is fair and balanced and well presented, and clearly original. There has been great effort and initiative to produce this story. It is indeed an excellent work of professionalism.

Journalist of The Year Award 2020

Mustapha K. Darboe has been chosen not only because of the number of categories he has won. His submissions are found to have been well researched and presented for easy understanding. The stories show that he puts in a lot of effort and work into getting them, and they are found to be newsworthy, relevant and impactful.

This year, the GPU executive unanimously award two Gambian women; Amie Joof-Cole and Fatou Jagne-Senghor for their many years of outstanding contribution and support to journalists and media development.

Amie Joof-Cole is a veteran Gambian journalist, gender and women’s rights activist, and communication and election expert. She is the Executive Director of the Inter-African Network for Women, Media, Gender and Development (FAMEDEV).

As freedom of expression and press freedom advocate, she presided over the establishment of the online Radio Alternative Voice for Gambians (also known as Radio AVG) about a decade ago in Dakar, Senegal to give alternative voice to Gambians at a time when voices in The Gambia were suppressed. Radio AVG provided opportunity to young Gambian journalists in exile in Dakar to make their voices heard from across the border, as well as develop their professional skills in broadcast journalism.

On many occasions, Amie Joof-Cole risked her safety and those of her family by giving shelter to Gambian journalists who fled to Dakar for exile especially during the last fifteen years of the former regime. She stood and spoke for those journalists in their country of exile and across the world.

Amie Joof-Cole spent decades mentoring and guiding journalists. Many of those journalists went on to become accomplished media practitioners. She remains a champion of media development and press freedom.

Currently working for Article19 as West Africa Director, she led campaign and advocacy initiatives for more than a decade to expose the appalling human rights situation of the Gambia before the African Commission on Human and Peoples Rights (ACHPR) and other international human rights bodies during the former regime.

Over the years, Fatou Jagne-Senghore co-authored reports, publications and contributed to setting up of programmes and initiatives to support persecuted journalists and human rights defenders in Tunisia before the Jasmine revolution and for the Gambia before the end of the repressive regime.  She has worked on policies, advising and providing technical support to governments and regulators on the implementation of legislative reforms to foster freedom of expression and access to information.

During the former regime, Fatou Jagne-Senghore provided both sanctuary and livelihood to Gambian journalists who fled to Senegal for exile. As champion of freedom of expression, she stood and fought for the media and freedom of express, and amplified the voice of journalists.

Fatou Jagne- Senghore received many distinctions and awards for her work for freedom of expression. These include the National Order of Merit by the President of France in April 2018 in recognition of her human rights’ work especially in the Gambia. In 2019, she was named in inaugural list of the100 Most Influential African Women by Advance Media.