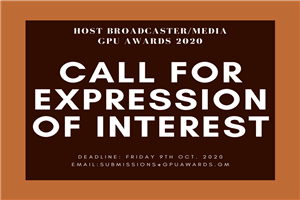 Appointment of Host Broadcaster/Media: Call for Expression of Interest

The National Journalism Awards 2020 is scheduled to take place on 24th October 2020. This year’s event is planned to be a virtual ceremony due to the Covid-19 pandemic and the restrictions on social gatherings. The virtual ceremony is expected to broadcast live on TV and online.

The Host Broadcaster/Media will be supervised by the GPU awards committee which has the mandate to approve the broadcast of the proceedings. The host broadcaster/media is expected to install audio visual equipment such as cameras and sound devices at the location(s) of the ceremony for a complete coverage of the event.

1.     The ability to broadcast from at least two different locations simultaneously.

3.     The ability to link online to other locations using platforms such as skype, Watsapp or any other appropriate online platforms

The Roles of the Host Broadcaster/Media are as follows

1.     Provide Live clean feeds of video and/or Audio to any TV or Radio Station for live broadcast of the GPU awards ceremony with the GPU awards logo on the feed at all times.

4.      Provide Video and Audio Feed to and from participants of the ceremony remotely using internet platforms.

All bids shall be submitted submitted to this email address: [email protected] no later than 2pm, on Friday 9th October 2020.