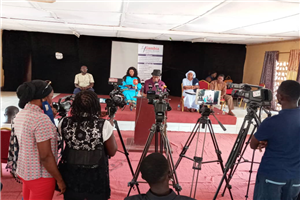 The National Journalism Awards committee on Saturday July 4th 2020, held a press conference to unveil plans for this year's Awards. The press conference was held at the Gambia Girl Guides training centre in Kanifing, where committee Chairman, Demba Ali Jawo told the press that the awards - staged yearly by the Gambia Press Union since 2016 - is "to reward and inspire media excellence in the country as well as honour journalists and media practitioners whose works stand out".

Journalists and media practitioners in the Gambia are to submit entries in thirteen regular categories to be assessed and nominated by independent media experts for awards. The awards ceremony is slated for 24th October 2020.

"In their assessment of the entries, the judges would be looking for the following: accuracy and relevance; grammar, style and presentation; the impact of the story, and creativity and originality," Jawo said.

He assures that judges will be independent and free from any undue influence from anyone or institution.