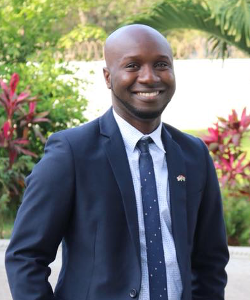 Hatab Fadera is an experienced media and communications professional. Over the years, he accumulated a wealth of experience in writing, editing, and publishing. Hatab joined the Public Diplomacy Section of the U.S. Embassy Banjul in August, 2015 as Cultural Affairs Assistant. He currently serves as the Strategic Content and Media Coordinator at the US Embassy. Hatab studied at the University of The Gambia, graduating with Bachelor of Arts (Cum Laude) in Journalism. He also completed courses in Public Diplomacy Foundation, Federal Assistance Management, and Social Media Management/Marketing at the United States Foreign Service Institute in the Washington. Prior to joining the Embassy, Hatab did media consultancy for some institutions and reported for a Swedish-based magazine. Between 2013 and 2015, Hatab served as the Deputy Editor-in-Chief of the Daily Observer Newspaper. Between 2015 and 2018, Hatab served as a member of the Gambia Press Union Executive Board, the umbrella institution for all Gambian journalists. In January 2020, Hatab was appointed a member of the maiden The Fatu Network Heroes Award seven-member panel. He is also a youth leader having co-founded a national youth organization, Side By Side. Hatab has a strong understanding of the local media as well as an extensive knowledge of Gambian society and the political landscape.